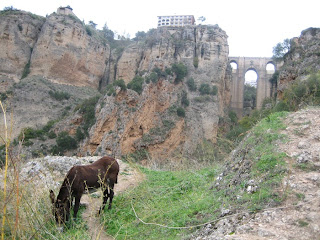 Situated 700m above sea level in the Serrania de Ronda Mountains is the town of Ronda -- one of the most breathtakingly picturesque towns I've ever seen. It's built on a rocky outcrop high above a neighbouring valley, with dramatic cliffs and a deep gorge running through the centre of the town, spanned (naturally) by a unique and much photographed bridge.

Its near impregnable position made it significant in Moorish times, and the town features multiple historic buildings from that time -- the most memorable being the ruins of the Arabic baths (Banos Arabes) and the Palacio de Mondragon (home of Moorish kings before the Catholic monarchs Ferdinand and Isabella kicked them out in the 1490s). The latter is now a museum devoted to the history and pre-history of the region -- tracing the hunter-gatherer origins of settlements in the region, to the Iberians and then the Roman occupation. Ironically, the museum exhibits petered out when it got to Moorish times! The musem did, however, reveal the deep and complex history of the region, reminding me of Sarlat and the Dordogne region: evidently, there are prehistoric cave paintings in the region, plus the ruins of an ancient town about 12km from Ronda.

It turns out Ronda also played a significant role in the Spanish Inquisition, plus was at the hub of much bandit activity in the past few centuries. It has a pretty amazing history, and multiple museums to delight the energetic visitor. 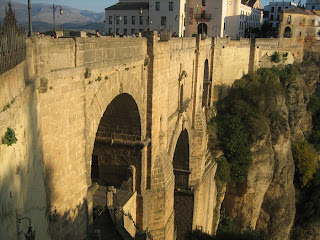 One of the most famous attractions of Ronda is its Puente Nuevo (new bridge), built over 42 years from 1751. This brige is evidently one of the most photographed structures in all of Spain, and one can see why. Not only is it architecturally unique, but its setting is quite stunning. It is one of just three bridges that span the Tajo Gorge -- on one side was the old Moorish town, highly fortified (I believe there was once a castle as well); as the city expanded after the Christan reconquest, the other side of the gorge was populated.
Posted by Ellen at 8:07 pm