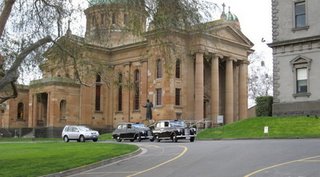 After significant build-up, M&M got married on Saturday. I don’t have detailed photos, but the bride looked beautiful (of course) and everyone had a lovely day.

I took Friday off, which felt a bit slack, but turned out to be the best thing. It meant that I had ‘a Saturday’, where I slept-in, did washing, vacuumed, tidied up, and generally relaxed. At 2:30 I went to see how M was doing and we had a manicure (first time for me). The nails looked great for a couple of days, but they’re a disaster now.

I had never been to Xavier before, so was surprised to find when we arrived for the rehearsal how attractive the campus is. Xavier Chapel is set on a hill amid old-style buildings, looking over sweeping ovals with a fabulous view of the city in the distance. A lovely setting for a wedding. The rehearsal was more work than anticipated, with everyone being whisked through the ceremony and me specifically being instructed in the arts of chief dress “fuffer”, at which I failed dismally.

We had dinner with the bridal party plus extras and got home to mum and dad’s at a reasonable time. In the morning, M’s other bridesmaid, Belinda, came around and we headed off to the salon for our coiffure. I ended with something that looked straight out of the sixties - big front and intricate twists created with 22 bobby pins. Everyone said it looked great, but I just thought it looked big.

The three of us transformed surrounded by champagne, sushi and sandwiches, aided by brother J. Mum also transformed, and then dad arrived with Hannah, who also transformed into the ‘red princess flower fairy’(??). The photographer was around by then, so there were many photos of bridesmaids slipping on bride’s shoes, taping dress to bride, fastening necklace etc etc. More photos followed outside, where Hannah behaved beautifully.

The cars arrived, and turned out to be London taxicabs - very fitting for M&M, who spent 18 months living in London a few years ago. Despite the fact that our cab driver bleated the horn all the way to the church (literally) it was rather an entertaining ride, although B and I felt like goldfish in a bowl. The wedding ceremony passed quickly, with M&M’s friend Kate singing beautifully and the bride entering to ‘Here comes the sun’ sung by Nina Simone. I didn’t do much dress-fuffing, but it didn’t seem to matter. The most contentious issue was where we were supposed to stand at various times. How confusing should a wedding ceremony be?

Afterwards, more lenses appeared everywhere I looked. Friends and family standing back with their digital cameras stuck out in front. Formal group photos. Many hellos. Sore cheeks from smiling. We were by this time very cold . . . More photos were taken at the St Kilda Botanical gardens with champagne. Still cold . . .

The reception was at Red Scooter in East St Kilda, where we finally warmed up. The extended canapés played havoc with my tiring feet, but it was nice to see people and relax a bit, official duties completed (or so I thought . . .). The rest of the evening passed quickly, with lovely food (I had the fillet steak), good speeches, dancing with the cousins (although I was surprised by bridal waltz time, because it is of course traditional for the bridal party to join in, which I’d quite forgotten about . . .). The gifts on the table were shot glasses filled with chocolate M&Ms and dessert was a plate of multiple small delicacies: mud cake, cheesecake, apple pie.

As the evening wound to a close, I became suddenly exhausted. Mum and dad dropped me home, but Mum and I had to wait for dad to drop M&M home first (fortunately just around the corner). Unfortunately, however, I had to wrestle with my dress for 20 minutes before I could get it off, then remove the 22 bobby pins, then remove the makeup . . . it was after 1:30 before I got to bed and I truly crashed.

The following day, M&M hosted afternoon tea for family and a few extras, including the bridal party. Everyone took a plate (except for me, being still in recovery mode, not to mention without shoes, since most of my gear had been left at mum and dad’s . . .) and the festivities rolled on. I think many were in ‘recovery mode’ much as I was. Nevertheless, it was a fitting closure to a busy yet happy weekend. I hope M&M have a nice honeymoon. They’ve gone to Broome with a hired 4WD . . .
Posted by Ellen at 9:47 pm

Email ThisBlogThis!Share to TwitterShare to FacebookShare to Pinterest
Labels: family