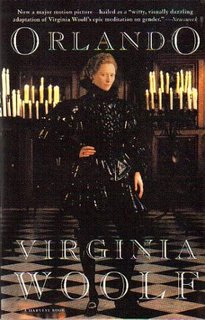 I must start by confessing that I personally put in a poor effort on this one. Orlando is a rich tapestry of images and ideas, woven together using very long sentences, extraordinarily long paragraphs, and . . . well, the entire novel is just 5 chapters. It is undeniably an intellectual book, using intellectual language and themes. In my opinion it is something to be savoured in small morsels, with plenty of time for reflection between. It is not a book to be read at speed, late at night after a really hard ‘intellectual’ day in the office.

I have already said I was extremely tired (and busy) all month. I frittered away three weeks before making a start, and then struggled to concentrate in the evenings as I tried to read it. It doesn’t really have a narrative drive; it’s all ideas and anecdotes. I made it half way through, but even then I was frustrated by my inability to really focus on it properly.

However, others had finished and enjoyed it very much. Here is a brief synopsis (from Wikipedia): It is the story of a young man named Orlando, born in England during the reign of Elizabeth I, who decides not to grow old. He does not, and he passes through the ages as a young man ... until he wakes up one morning to find that he has metamorphosed into a woman — the same person, with the same personality and intellect, but in a woman's body. The remaining centuries up to the time the book was written (1928) are seen through a woman's eyes.

We talked a bit about Virginia Woolf and Vita Sackville-West, and about how much of Orlando might have been autobiographical, rather than solely based on Vita’s life. We talked about the passing of time, and speculated on N’s epiphany that perhaps the whole story had gone on in Orlando’s head; that in fact Orlando was a (fictitious) woman of 1928, who was a little mad with a lively imagination.

We also talked a bit about Virginia’s other works, in particular Mrs Dalloway, and the experimental techniques Virginia used in writing — such as stream of consciousness. Her ability to write in a way that presages modern film-making was also discussed (the example was given of a particular ‘great hall’ scene, described in the manner of movies).

The discussion left me wanting to read more of Virginia Woolf’s work, but I will need to find a time when I am relaxed and fresh. I plan also to give Orlando on audiobook a go.

Next book is The Sound of One Hand Clapping, by Richard Flanagan.