Page Turners: The sound of one hand clapping 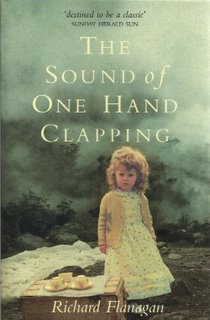 Author: Richard Flanagan
Leader: Astrid
Host: N
Food theme: ‘pickles and bread'
Date: Thursday 5 October
Here's the long-awaited summary of our most recent Page Turners novel and discussion. I took notes this time so I could report more accurately.We had quite a small turn-out to this meeting, but at least four people had finished the book, which still made for a good discussion. (Two of us kept rather quiet: one hadn't started, and I had read up to about p65.)
Here's a synopsis (from Amazon):

From Publishers Weekly
Tasmania--vast, mysterious, like "the unknown country of the heart"--is the setting for this
powerful tale of a father and daughter who struggle to rise above the forces of
history and personal tragedy. Sonja Buloh barely remembers the night 35 years ago
when her mother, Maria, walked out the door of their crude hut in the dismal
construction camp at remote Butlers Gorge, never to return. The mystery and
heartache surrounding that event echo through Sonja's young life all the way to
1989-90, when the pregnant Sonja returns from mainland Australia, longing to see
Tasmania and her estranged father. Bojan Buloh was just another "reffo" from a
Slovenia ravaged by WWII, recruited "to do the wog work of dam-building," when he
found himself the lone parent of three-year-old Sonja. Bojan's poverty and his
memories of his wife and of wartime atrocities made Sonja's childhood difficult;
his brief hopes for another marriage were dashed, and Bojan fell into drinking
and beating his daughter. Sonja's painful memories mix with those of her sober
artie's (the affectionate Slovenian word for father) tenderness and his inspired
woodworking ("his hands knew a restraint which lent him grace"). Though her
father cannot articulate his suffering (one of the themes here is the inadequacy
of words to express the totality of existence), she remains bound to him in deep
understanding of his despair. Only after confrontations, revelations and Bojan's
symbolic and apocalyptic rebirth is the past redeemed and the pair reconciled.
Australian writer Flanagan (Death of a River Guide) brilliantly illuminates the
lives of those who are "forgotten by history, irrelevant to history, yet shaped
entirely by it." His characters here transform tragedy as they discover their
individual worth.

I know that one of the reasons I didn't finish this novel was because it's pretty depressing, and I think most of the others felt the same way. There's nothing uplifting that happens in the novel --- except perhaps for the ending, where apparently all is forgiven when Sonja has a baby; but not many of us thought this was realistic. (I also thought it was a bit gross that the genetic father of the baby was nowhere in sight, and she was effectively having this baby “with her father” as part of their reconciliation. Yuck.) Having said that, one of our number stated that she firmly believed that, despite the violence Bojan committed towards his daughter, there would still have been love present. I think most of us found the idea of beating up a child quite sickening, and that to have a child might just perpetuate the damage, rather than heal it.

Blame
This novel did generate good discussion though. We spent some time discussing how to attribute blame: was Maria (the mother) actually more to blame for abandoning Sonja? By leaving, she created the situation that drove Bojan to drink and violence.

Later, it turns out she committed suicide, and was found hanging from a tree. This led to discussions of whether suicide was a worse betrayal than merely leaving, since there was no room for a lingering hope that one day Maria would reenter their lives. We discussed the difference between abandonment (of the child) and suicide (abandonment of everything). The motives for Maria’s suicide in the book seemed unsatisfying, according to some. I think none of us could possibly understand how a mother could do that --- put her own troubles over the well-being of her child, so-to-speak.

Title
We talked briefly about the title of the book. “The sound of one hand clapping” is evidently a zen koan that means “the soundless sound”. We interpreted it in the context of this book to mean a recognition of incompleteness. Richard Flanagan himself acknowledges that the title was a last minute addition. (Sounds to me like he tried to come up with something that sounded cool, rather than having profound relevance to the story.)

Refugees
This is obviously a hot topic in Australia, and we avoided the obvious rant (although we all agreed) about how bad we felt about this government’s treatment of the many refugees that arrive in Australia. However, we spoke about the experiences of those refugees that arrived in Australia during the 50s (as per the novel), about the two-year contracts and labour camps, about the drinking and gambling culture that occurs when community guidelines are missing. It was sobering to reflect upon how little has changed.

Themes and metaphor
Just finish up we briefly touched on two of these:
China tea set --- This was Sonja’s as a child, but got smashed at some point during the story. When she returns to Tasmania at the beginning of the book (although as a grown woman), Sonja recovers the pieces and commences piecing it together again. I understand that her father ultimately glues it back together --- symbolic of his need to patch up their relationship.
Suitcase --- When she leaves, Maria takes a battered old suitcase, which she stands on to hang herself. It seems that Sonja takes the same battered suitcase when she leaves at 16, and I’m not sure whether it reappears in the “present day”. This seems to represent the passing of baggage from character to character?

Anyway, that’s enough on this book. Next one is Brave New World by Aldous Huxley.
Posted by Ellen at 9:49 pm