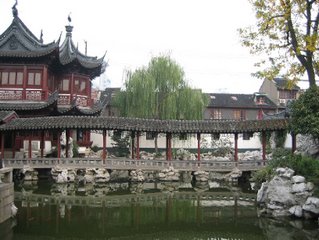 For the past two weeks I have been in China, and to my surprise I was totally unable to log into blogger (or access it in any way). The government has completely blocked it. This means I was thwarted in my plans to post every now and then about my travels.
But now I am back!I will most likely start off slow, but I intend to post periodically over the next few weeks about aspects of China that I found interesting.
The photo above is of one of the courtyards of Yu Yuan in Shanghai. These are preserved traditional gardens dating from the Ming Dynasty (1368-1644 AD).
Chinese traditional gardens are quite unlike any gardens I've seen before. They consist of interlocking courtyards, either walled or divided up by pavilions of all shapes and sizes. The courtyards are filled with artificial rock (and cement/mortar) formations built up to resemble 'mountains'. Sometimes there is a pond (with fish and water lillies). Plants and trees are integrated with the rock formations - I can't remember too many of the plant types, but I do recall they included oleander, Japanese maple and poinsettia.
The gardens are usually highly decorative, including stone mosaics of objects such as dragonflies along the paved pathways and dragons in various forms. They also often contain a form of Chinese bonsai. The more ornate the better!
In addition to Yu Yuan, we saw gardens like this in Suzhou, which is renowned for its gardens, and Beijing, within the Forbidden Temple complex. The rock formations themselves are quite ugly, but the gardens as a whole can be very attractive and peaceful. It was lovely just to wander through, soak up the atmosphere, and pay attention to all the detail (which I've described very badly!).
It seems rather a lovely lifestyle, though, with real living areas (buildings/pavilions) broken up by various courtyards. The 'Garden of the Master of the Net' in Suzhou struck me like this in particular - the entire complex (house and garden) is walled like a private residence, but instead of our concept of the garden surrounding the house, it was all broken up like a patchwork of house and garden. I could easily imagine a family in residence, the kids running and yelling out of one pavilion, through the nearest paved courtyard (maybe falling in the pond or feeding the fish) then bounding into the next indoor room.
Posted by Ellen at 11:01 pm No comments:

Email ThisBlogThis!Share to TwitterShare to FacebookShare to Pinterest
Labels: travel

Hmmmm. These were all written a week ago, last Wednesday! I've definitely been in wind-down mode, preparing for a two-week holiday in China. But I didn't intend to stop completely! I'm guessing my count for the next two weeks will be zero. In fact, probably the next three weeks, if I'm realistic. It's a shame, but I think it will do me good to get away from a computer for a while.

Back with word reports in a month.
Posted by Ellen at 12:23 am No comments:

The following insights come from Masterpieces of Philosophical Literature by Thomas Cooksey, courtesy of one member of Page Turners who delved a little further . . .

It turns out that the reason the societal structure of BNW reminded me so much of the one proposed in Plato’s “The Republic” is because Huxley intentionally used Plato’s structure to explore the paradoxes of a utopian society.

Another snippet I found interesting is that Huxley not only borrowed the title “Brave New World” from Shakespeare’s “The Tempest”, he also borrowed the main constellation of characters (with a few twists).
* John the Savage = Caliban
* Lenina = Miranda
* Mustapha = Prospero the magician (“above the fray, manipulating events”)
* Bernard Marx (stunted by alcohol in his blood-surrogate) = Stephano the drunken butler
* Helmholtz Watson = Trinculo the jester

In “The Tempest” Stephano (Bernard) and Trinculo (Helmholtz) “join forces with Caliban (John) in a plot to overthrow Prospero (Mustapha), their subversive pretensions more comic relief than any real threat to the system”.

Also, whilst many of the characters’ names & personalities are based on composites of real people on the world stage, John the Savage is loosely based on D.H. Lawrence, a close personal friend of Huxley’s. Lawrence, best known for “Lady Chatterley’s Lover”, left Europe after WW1 to travel the world, living in Mexico for a while (where he spent some time with the natives). According to Thomas Cooksey, “both (John & Lawrence) find themselves at a loss, the Western world sterile and unappealing to them, and the primitive world closed and inaccessible”. Hence "a plague on both your houses".

All very interesting. What a fabulous book for discussion!
Posted by Ellen at 12:13 am No comments:

Brave New World by Aldous Huxley proved to be a really good book choice for Page Turners, owing to (a) the number of people who had "always planned to read it" and therefore made the effort to get it finished, and (b) the sheer weight of the novel, which (although short) has so many themes and issues inside that we barely scraped the surface.

I took notes during our meeting, but it was a little difficult to get everything down! This was partly owing to point (b) above, and partly to the fact that there were so many of us (~12?) that everyone had a point to make which often changed the direction of conversation quite abruptly --- often, I felt, before we'd finished the previous point. However, this didn't really matter. I think it was good that so many of us something to say. It is certainly a very thought-provoking novel.

Here's an excerpt from Wikipedia describing the novel:

Brave New World, published in 1932, was first intended as a dystopian novel by Aldous Huxley. Set in London in the 26th century, the novel anticipates developments in reproductive technology, biological engineering, and hypnopædia that combine to change society. The world it describes could also be a utopia, albeit an ironic one: Humanity is carefree, healthy and technologically advanced. Warfare and poverty have been eliminated and everyone is permanently happy. The irony is that all of these things have been achieved by eliminating many things people currently derive happiness from — family, cultural diversity, art, literature, science, religion and philosophy. It is also a hedonistic society, deriving pleasure from promiscuous sex and drug use.

Brave New World is Huxley's most famous novel. The title comes from Miranda's speech in Shakespeare's The Tempest, Act V, Scene I:

"O wonder!
How many goodly creatures are there here!
How
beautious mankind is!
O brave new world,
That has such people in't!"

Personally, I found the novel very interesting, but I don't think I really liked it much. There weren't many characters I found sympathetic, and those that I did find sympathetic, invariably turned out to be not so. The main characters were Bernard Marx, a highly intelligent misfit in this "utopian" world, who takes a friend (Lenina) to a savage reservation --- a type of Native American reservation that has not been "civilised". There, they meet Linda, a woman from the civilised world who was lost there some 20 years ago, and her son, John. Bernard gets permission to bring Linda and John back to civilised London. And this is where the story really starts.

What ensues is an interesting social experiment. John "the savage" is an instant celebrity by virtue of his uniqueness, and Bernard also, by virtue of his association with John. Bernard reveals himself for the weasel he always was: celebrity completely goes to his head and he becomes completely obnoxious. John struggles to get by in a society about which he's heard a lot from his mother, but which doesn't really make sense to him. He's also a walking Shakespearean encyclopedia (that being his only reading material on the reservation), but Shakespeare is banned. He also has a burning love for Lenina, but doesn't feel himself worthy of her. Lenina herself is close to being in love with John, but can't understand why he seems not to like her. It's total clash of cultures: John detests promiscuity because of the way his mother was treated at the reservation; Lenina has been conditioned to expect it. The outcome is dreadful.

There is so much one could say about Brave New World. These are some of the points we talked about:

The ongoing discussions about "nature versus nurture" in determining character

Sexism in the novel: Promiscuity was expected, but could women say "no"? We were divided on this point, depending on interpretation.How much was John conditioned by his upbringing?

Use of song-orgies as an outlet for emotion in a word where there was little emotion other than "happiness".

Definitions of happiness: were people in this society in fact happy? Who decides what happiness is? The society seemed to be more about control and stability than happiness.

The ending: Interestingly, it turns out that the end of novel is actually ambiguous, with half the group interpreting it one way, and half the group the other. We wondered whether this was intentional on the part of the author, or whether half of us are simply wrong!

Henry Ford, who is reverently refferred to as "Our Ford" in godlike worship, and how he was the inventor of the production line, which is used widely in this society to make babies.

Soma - we didn't actually talk about it much, but since this seems to be one of the most memorable things about Brave New World for many people, it must be mentioned! (Soma is a multi-purpose drug, used for tripping and sedating.)

The above seems wretchedly inadequate for a discussion about Brave New World! However, I think that's all I'm going to say. It's a novel that is definitely worth reading and I am glad that I have now done so. It's the type of novel that will percolate through the mind for some time to come, I think.

Next book is Do androids dream of electric sheep?, by Philip K. Dick.

Just scraped in past 1500 this week. It's been a bit tougher. Had more challenging scenes to write. Nevertheless, I got there :-)
Posted by Ellen at 9:49 pm No comments: