Introduction to the Green Fairy 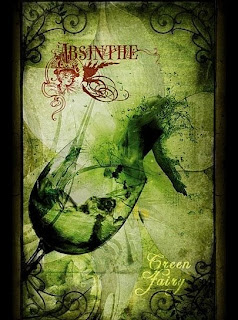 Friday evening. Exhausted, drained from a tough week of work. In need of relaxation, socialisation. What better solution than an evening with good friends, sampling various different types of absinthe for the purpose of 'research'?

I had never tried absinthe before, and was completely ignorant of its history and the various rituals associated with its consumption. Fortunately, our host was an experienced absinthe drinker, and had all the implements -- right down to the slotted spoon. Check out this Wikipedia entry on absinthe for all the details.
Put simply, however, absinthe is a spirit of up to 70% proof, flavoured with anise and other herbs, including fennel and wormwood (artemisia absinthium). The traditional way to drink it is to mix it with iced water poured through a sugar cube placed on a specially slotted spoon. The mixture clouds (looking rather like aspirin) and the flavours are brought out.
The other way to drink it is to torch an absinthe-soaked sugar cube until the sugar caramelises and then mix this into the spirit straight. It's like breathing fire.
The evening was conceived by our host, who is to write a magazine column about absinthe (also known commonly as the Green Fairy) and needed to sample some different blends. She had 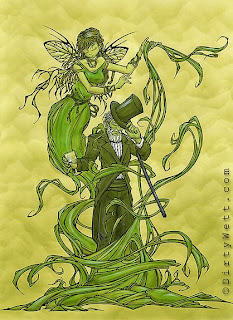 some sample bottles provided by a specialty shop, plus an entire bottle. With some anticipation, five of us gathered around the dining table and commenced the ritual.
We tried four different absinthes in all, passing each glass around the table, for the stuff is seriously expensive and very alcoholic. These are the ones we tried:
Mansinthe -- partially designed by Marilyn Manson, winner of many medals. We judged this one excellent.
Nouvelle Orleans -- This one was harsher, with a not so nice aftertaste. I don't think we liked this one so much.
Duplais Blanche -- I thought this was quite similar to the Mansinthe, but I don't think my palette's too discerning.
Verte de Fougerolles -- We sampled this the most, because we had the whole bottle. Again, I couldn't really pick the difference, but I liked it. (Er . . . I don't mean we drank the whole bottle!)
We tried most of these with either sugar or a syrup called 'sirop de gomme' -- orange blossom syrup -- deciding that the sugar was best. We also compared the traditional 'mix with water' style with the 'flaming sugar' style and decided we rather preferred the latter. But we were only taking really small sips, and I probably agree that the traditional method works better as a drink. 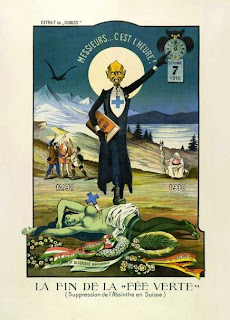 As we sampled and talked and ate (it must be said) we also viewed a series of images inspired by absinthe over the years. Some were advertisements for various different brands, others paintings by artists of the day, others anti-absinthe propaganda or anti-anti-absinthe propaganda. I've included a few here, since they are very interesting.
It was a lovely evening. And now that I read on the Wikipedia site that absinthe was embraced by the Parisian bohemian set (artists and writers), it feels all the more fitting that we, a bunch of writers, spent an evening in this way.
Posted by Ellen at 8:51 pm