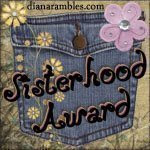 I've been tagged by Indii to share the Sisterhood award (thanks, Indii!). The idea is to share great Sisterhood moments from either adulthood or childhood.

So here are a few of mine.

1. 20 yr reunion of first year engineering: By the end of the first week of my engineering degree, I had formed a group of women friends that would stay with me forever. It was a clumping effect, and we became a bevy of gals in a swarm of boys. A few weeks ago we celebrated the 20 yr anniversary of our meeting with a dinner. Although inevitably some have dropped off, and others have breezed in, the common factor is that we all hung out together in the caf at uni. It was fabulous to commemorate the achievement of a two-decade friendship group.

2. The first writers' retreat: Back in August last year, seven of our brunch regulars congregated down at the island for our first retreat. It was a five-day sojourn of fabulous food, marvellous conversations and intense writing.

3. Climbing Mt Bogong in year 10: It was a mixed school trip, but I went with two of my particular friends and shared an amazing long weekend. We climbed the mountain, and also spent one morning in the very early hours gazing at Halley's Comet. A memorable expedition.

4. Weekends with my niece, H: Before the entire family left for Germany, H and I shared a couple of weekends when she was 4 and 5. These were days of complete indulgence (me indulging her) and building a special relationship. We watched DVDs, visited the children's farm, embarked on creative activities, and H even got to sleep in Aunty Ellen's bed! (Incidentally, sleeping in my grandmother's bed when I was young remains a special memory for me.)

5. Year 12 Physics project: Way back in year 12, Helen and I embarked on a physics project, where we could apply ourselves to anything. I can't recall why, but we decided to build a solar power hot water heater. We spent multiple weekends on the project, took it extremely seriously, and had a ball.

6. First European travels: After graduating from our undergrad degrees, Helen and I took off overseas for 3 months. Backpacking on an extremely limited budget, we travelled through Greece, the UK, France and Italy, experiencing the wonder of new places and cultures. I don't think I will ever forget the feeling of that first morning in Athens -- the euphoria of being somewhere else, and confronted by all that history.