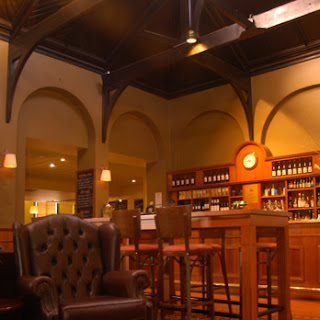 Spent a relaxing afternoon at the iconic Elsternwick Hotel (the 'Wick') today, finishing up in a secluded Chesterfield-style booth that would easily seat 8 people . . . And already I'm thinking this would make a brilliant location for a small gathering of writers with laptops. Hang the library, this place had a bar. On a Sunday afternoon the place was quiet, and the high vaulted ceiling lent just the right atmosphere. As I sat there, I became quite enamoured of the idea. We could also have cake and coffee, so what's not to like?

Having said that, I cancelled all housework yesterday and spent much of the day on the couch at home writing. This was the first significant stint since about January, and as a result I'm really happy with the progress made in the past week (after kicking things off on Tuesday). But it can't stop there . . . my goal is now to write something every day -- a little or a lot, so long as it's something. The key thing is to stay in the story. So for the moment the couch is my 'where', and the rewrite of novel #1 is my 'what'.

But someday, maybe soon, I'd rather like to pack up my computer, grab a booth (where the table is the perfect height), and give the Wick a go.
Posted by Ellen at 11:44 pm

Email ThisBlogThis!Share to TwitterShare to FacebookShare to Pinterest
Labels: the rewrite, writers