Me and Orson Welles (in Yarraville) 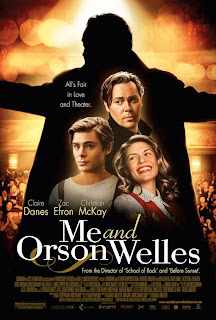 I trekked off to the Sun Theatre in Yarraville last night to see Me and Orson Welles, a film about the staging of Orson Welles' renowned 1937 production of Shakespeare's Julius Caesar at the Mercury Theatre in New York. Experienced through the eyes of Richard, a 17yr old high school student who talks his way into a small role in the production, the film explores the brilliance (and massive ego) of Orson Welles, and the world of theatre and live radio plays.

It's a fascinating and thoroughly enjoyable insight into the subject, with fabulous performances. Much has been made in reviews about the 'mermerising' performance of Christian McKay as Orson Welles, and deservedly so. He is certainly dominates the movie, and will be long-remembered in this role. Zac Efron as Richard gave a subtle performance to counterbalance the bombast of Welles, and what I liked about this character was his honesty. During a single amazing week, Richard learnt much about how the world works, experienced amazing highs and lows, all while remaining true to himself and honest with others. I liked this, because all too often in such films tension is created by characters lying or cheating, but there was none of this (from the main character at least).

Another theme of the movie was the pursuit of dreams (largely of the artistic/creative kind) and to what lengths people will go to achieve them. Aside from aspiring actor Richard, Claire Danes's character goes to astounding lengths just to get an introduction to Hollywood producer David O Selznick (of Gone with the Wind fame); while Richard's friend Greta is writing away madly in her metaphorical garret, and experiences the joy of her first short story publication.

Me and Orson Welles has been touted as one of the best movies about the theatre, and it certainly presents a fascinating and highly watchable insight. 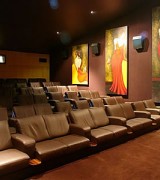 Another star of the evening was the Sun Theatre itself. I hadn't been there before, and when I encountered the LaScala Lounge cinema filled with soft leather-looking arm chairs, I think my jaw dropped. It was simply delightful to slouch back in the comfortable softness as though in front of the TV at home. My tip would be to find out what movies are playing in LaScala and choose what to see that way!

The bar, Acqua e Vino, where we met for drinks before the film also had a really cool vibe, all leather arm chairs and timber coffee tables. Formerly wine bar of the year (2007), this place has a lever arch file for a drinks menu (that is no joke). All in all a night of great experiences (and company of course)!
Posted by Ellen at 10:15 pm