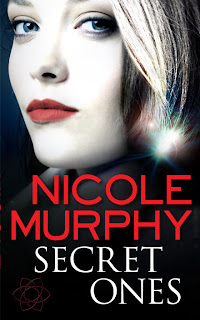 The read-a-thon has continued apace this month -- I haven't read this much in years! In fact, I even devoured a book in two days last week -- Nicole Murphy's debut, Secret Ones. Began it Thursday morning on the train and finished before midnight on Friday. The novel has been classified as paranormal romance, yet despite a very strong relationship thread, I felt the non-romance plotlines were strong enough to balance out the lurve and lift the experience out of M&B territory (just).

I liked the world created by Murphy. It's set partly in contemporary regional Australia (where there is, nonetheless, a university), and partly in a mythical Irish town almost entirely populated by a secret race that uses power. In 'Harry Potter' fashion, these people have their own governing body, academic milestones etc, and most are contemptuous or at least dismissive of humans. The story centres around Maggie (trained in the power, yet sympathetic towards humans) and Lucas (a physics genius who discovers he actually has the power) and the fight for him to recognised as one of them and trained.

Having said all that, this is a book that will probably only appeal to those who like a strong romantic angle. If you're not that into the love stuff, then give it a miss. It is a very dominant thread. I, however, found it easy to immerse myself in and consequently finished it in quick time.

In between this and the Tide Lords series, I also snuggled down with Kirstyn's Madigan Mine. Well, maybe snuggled is not quite the right word. It's beautifully written as predicted, but rather too disturbing to inspire the warm contentment that snuggling evokes. There are several 'ew' events, and some rather nasty moments. Not to mention a growing feeling of unease. Funnily enough this can also be found in the paranormal section of bookshops, but it is very different from Secret Ones in style and theme. Much more of an intellectual read, with love ripped apart and stomped on.
Posted by Ellen at 10:58 pm