Last night I saw the Australian movie, The waiting city, which is about a 30-something couple trying to adopt a child in Calcutta. She's a workaholic lawyer, he's a musician recovering from depression, and this film explores their relationship and how it stands up to the pressures of a fairly stressful situation and environment, with some other conflicts thrown in. The film is resplendent with the textures, flavours and sounds of India -- definitely the highlight for me, closely followed by some great performances. The portrayal of India felt truly authentic, and its impact on both the main characters seemed profound. 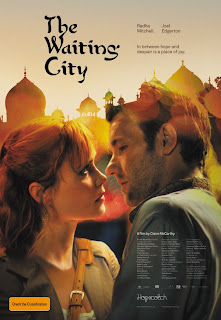 I very much enjoyed the movie. However, I did feel that it was contrived in parts: in particular much of the conflict between the couple. Instead of relying on the situation to create tension -- and there was plenty to be found that was truly believable -- a few too many external and past pressures were incorporated and the result was heavy-handed and smacking of coincidence. In this the film was oddly unbalanced, for there were plenty of long reflective moments when India was allowed to have her say, and events left to progress gently with subtlety. These were the best moments, and on the whole made up for the more contrived plot points.

All the same, I was left largely unmoved on an emotional level by this film, even though I did care about the characters and some difficult stuff happened to them. Maybe it was the contrivances, I don't know. I did feel a sense of satisfaction with the ending, so perhaps all the other bad stuff was simply 'meant to be'.
Posted by Ellen at 10:40 pm