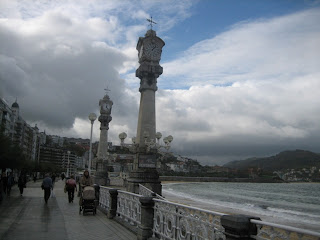 Our first taste of Spain was San Sebastian, a Basque beach town on the northern coast of Spain, which owes its popularity to the fact that the Spanish royal family built a Summer Palace there in the 19th century. It's a town of different facets: old town with multitudes of tapas bars (known as pinxos in this region); beautiful lush green hill on which stands a medieval fortress and the remnants of French and English militia (including an old English graveyard); broad semi-circular promenade, hugging a golden sandy beach and aquamarine waters; and located at the far reaches of the bay, a magnificent piece of art, known as the Wind Comb, which combines rusted iron sculpture, wind and water to create a unique experience.


It rained quite a bit on our day in San Sebastian, so we didn't really see the summer party town. But we did enjoy our walk (and the wind comb in particular) and I became quite proficient at saying 'thank you' in Basque – which is 'Eskerrik Asko'.

We are learning to eat differently in Spain – the main meal is typically at lunch time (~2pm), with tapas style dinner starting late (~8pm). Most of the shops and many attractions close between about 2 and 4 for siesta, which should make the next few weeks interesting. Our lunch in San Sebastian was 'the menu of the day' – a three course meal which included a bottle of wine between the five of us. We had a choice for each course – I had paella (because, well, I'm in Spain), stuffed capsicums, and rice pudding (yum).

The wine in Spain is so far very good and really cheap. A glass of very passable red (often temperanillo) in a bar is around 1.5 Euro!
Posted by Ellen at 4:45 pm