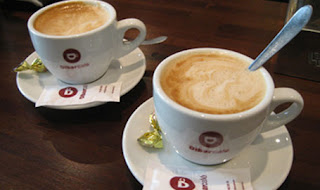 Before I leave Spain behind entirely, there are a few final observations I want to make.
First of all, a further and final note on coffee. In my travels through Spain (and France too) I've had many different coffees. In France, I learnt soon to ask for a 'cafe au lait', which essentially proved to be a smallish and strong cafe latte. In Spain, the term is 'cafe con leche' for essentially the same thing. What is different in Spain, however, is the process. Invariably one is presented with a shot of espresso in a cup, and the milk is provided separately in a jug, often poured by the waiter/bartender. I grew to rather like the ritual involved -- and the coffee was just about always great. I did start to hanker for a large skim flat white/latte after a while (there are no large skim milk coffees in Spain or France), and succumbed to Starbucks on my final day in Barcelona, but aside from that the coffee experience was extremely positive. It was also quite a deal cheaper than at home.


Secondly, the dessert we know as Creme Brulee, is everywhere in Spain known as Creme de Catalan, or Catalan creme. It was available on just about every menu, especially the various 'menus del dia' (menus of the day), and I found myself eating it quite frequently. As a result I think I may have developed rather a taste for it. I've always liked it, but it's never been something that I've ordered. This could change!
Finally, breakfasts. The vast majority of our breakfasts in Spain were 'Andalusian breakfasts', which consist of a coffee, a glass of freshly squeezed orange juice, and some form of toast with a pureed tomato spread, olive oil and Spanish-style ham. This does actually taste quite good, and is often very good value, but after two weeks I was rather over it and ready for a good English breakfast. Not until Barcelona could we find anywhere that served eggs for breakfast . . . the irony being that heaps of places served eggs with sausage and fries for lunch!
Posted by Ellen at 7:49 pm