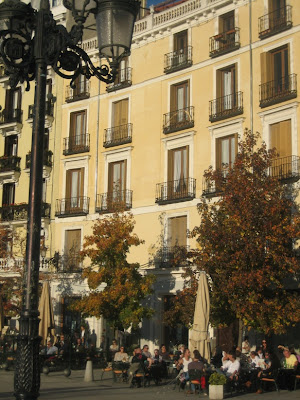 I didn't really know what to expect from Madrid. Turns out Spain's capital is a bustling, art-filled, cosmopolitan city that once again effectively juxtaposes the ancient, old and very new.

Over the past few days we have pounded the cobbled and concreted pavements to explore as much of the city as possible. Mostly we followed a self-guided walking tour, but othertimes followed our noses to experience the city. We stumbled upon at least a score of plazas, cradled in nooks made by the twisty narrow streets, usually home to rows of outdoor tables that belong to several cafes. There are seriously more cafes here than in Melbourne! And every one calls to me and I want to sit down and bask in the sunshine while sipping a coffee.

The Plaza Mayor (pronounced ma-your) is the largest and most famous of these. It's very central and was formerly used for such events as bull fights, knightly tournaments, festivals and the burning of heretics. Now it's the social hub of the city, filled with cafes and street performers and the like. It's surrounded on four sides by multi-story buildings, and is very picturesque.

On our first afternoon in Madrid, we decided to 'knock over' one of the main sights - the Palacio Real. This is an 18th C Royal Palace and the rooms open to the public are among the most ornate I have ever seen. The ceilings are all painted with beautiful frescoes, mostly of mythological scenes, and all the other decor is similarly lavish. The armoury also features a massive display of beautifully engraved suits of armour (both for men and horses) and weapons. Apparently the palace is still used for state events, although different rooms than those open to the public.

Another highlight of Madrid was the Ermita (Hermitage) de San Antonio de la Florida, which is an 18th C chapel featuring frescoes by Francisco de Goya. It is also known as Goya's Sistine Chapel, and it's easy to see why. The paintings of angels and cherubs and other mythological scenes are amazingly beautiful. Goya's tomb is also here in this little chapel, which is free to visit. We had to walk a long way and try quite hard to find this little gem -- it's not well publicised, and we can't help but think this is perhaps intentional.

Like many European cities, Madrid has its fair share of old churches, and we visited a few of them. We also checked out the Egyptian Templo de Debod, which has been relocated here stone by stone from the Aswan valley. (This site was absolutely packed with tourists, whereas Goya's Ermita had very few visitors. The contrast was striking, particularly when the Ermita was 10 times more impressive. But probably a good thing.)

Of course we also visited the Prado Museum -- one of the great art galleries of the world. I have to confess I probably didn't do it justice, for we turned up exhausted after a long day of walking and exploring, but we did spend 1.5 hours wandering through most of it, albeit at a breakneck pace. We made sure we saw the works by Goya (although in contrast with his holy frescoes in the Ermita, these were dark and contorted and in a completely different style), plus we also saw the impressive Reubens collection, which is the largest in the world. I also found some pieces by Bottecelli, Titian, Raphael, plus other famous Spanish painters.

The final place of note are the expansive El Retiro gardens, which feature many kms of car-free pathways and grassy areas where families can picnic etc. We went there this afternoon, and being a Sunday this seemed to be the place where it's at. It also features a magnificent art gallery buried in its depths, and a 'glass palace' which looks like an ornate conservatory and appears to be a venue for exhibitions. We walked through as the light was fading.

Most of the main sites of Madrid hark back to the 18th C, but there are the scant remains of an old Roman? viaduct, plus the ruined foundations of an old Moorish settlement. Madrid was evidently a minor town until the mid 16th C, when it was made the capital owing to its centralised geographical location and wealth of room for expansion.
Posted by Ellen at 9:28 pm