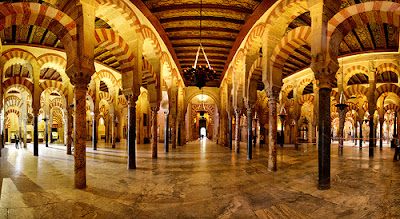 An overnight stop in Córdoba saw us spend a short afternoon in this city yesterday (after a 5 hour bus ride). The highlight was definitely the Mezquita - Cathedral, which is a massive Moorish mosque that was long ago converted into a Catholic cathedral. (In actual fact, it was a visigoth basilica first, before being destroyed and appropriated as a mosque, before being re-appropriated...)

We saw the outside of something similar (and smaller) in Toledo, but nothing could have prepared us for the magnificence of this building. It features vast open prayer floors with graceful arches, alongside a multitude of small side Christian chapels. It's the type of place where you just want to sit and soak it all up, but unfortunately we arrived with only 40 mins until closing time, and they made sure we left by that time.

We also spent a lovely evening in a local wine and tapas bar in Córdoba. We met up at 9pm -- which is the typical time in Spain to meet for tapas -- and herded six of us around a table in a semi-private alcove. We spent just a couple of hours with a bottle of wine and some beers, but it was a great way to spend the evening. We are getting used to Spanish dining: lunch after 2pm, coffee and cake at around 5:30pm, dinner after 8:30pm!
Posted by Ellen at 6:53 pm