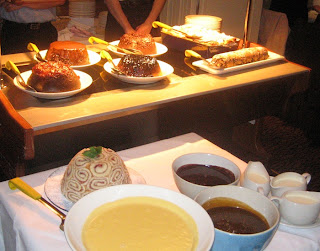 At the Three Ways House Hotel in Mickleton, somewhere in the English Cotswolds, is the rather unique Pudding Club -- dedicated to preserving the Great British Pudding. We booked about seven months in advance for the privilege of attending a 'meeting' of the Pudding Club, held once a week on Friday evenings. In fact, it was just about the first activity locked in on this super-holiday I'm enjoying.

Here's how it went down yesterday evening:
1. choice of 'light' main course, which wasn't all that light at all.
2. Procession of the puddings, during which we were introduced to our victims for the evening. There were seven in total, and the challenge to try every one was issued by our Pudding Club host. All seven puddings were arrayed for our eating pleasure in any order we desired (with lashings of custard).
3. Pudding #1 -- Lord Randall's pudding. A steamed pudding with apricot and marmalade. 8/10
4. Pudding #2 -- Coconut and jam pudding. A steamed coconut pudding with jam glaze. 7/10
5. Pudding #3 -- Sticky Toffee & Date pudding. 9/10 [My pudding of the night.]
6. Pudding #4 -- Passionfruit Charlotte. A cold passionfruit mousse with swiss jam roll as a palate cleanser. 6/10
7. Pudding #5 -- Squidgee chocolate and nut pudding. Kind of like a chocolate self-saucing pudding. 7/10
8. Pudding #6 -- Bread & Butter pudding. 8/10
9. Pudding #7 -- Spotted Dick. A suet pudding with raisons etc. Not popular on our table. 3/10

We were invited up table by table and could have any pudding we desired. The rules were: one pudding at a time, keep your bowl, and make you sure you finish one before getting the next round.

The serves started off modest in size, and definitely shrunk as the evening progressed. Despite this, it was all I could do to eat the seven portions of pudding. Although I was initially confident in my ability to eat all seven, it was almost impossible to eat the last serve -- the fact it was Spotted Dick didn't help, because I didn't much like that one.

I left the Three Ways House Hotel wondering whether I would ever eat again. Now of course, I think back to some of those puddings and my mouth starts watering. Now I could fit a few more serves in!
Posted by Ellen at 9:00 pm