1st Bus: local transport in Seville to convey the group from our hotel to the main bus station. HAd to squeeze the group on with packs udring peak hour. We had an 'Adalusian breakfast' at the bus station - turkish style toast with smeared fresh tomato, olive oil and Spanish ham (similar to prociutto), plus a coffee.

2nd Bus: Coach ride (2.5h) from Seville to Tarifa, the southern-most tip of Spain marking the dividing point between the Atlantic Ocean and Mediterranean. It's a gorgeous beach town, where surfing and whale-watching seem to be popular. We arrived around lunchtime today, but didn't hang around too long...

3rd Bus: Transport from Tarifa to Algeciras, a Spanish port town near Gibraltar -- very modern-looking and quite big.

4th Bus: Local bus from Algeciras to La Linea, the Spanish town that abuts the UK territory of Gibraltar. It took around an hour in heavy traffic and stopping everywhere. From La Linea we walked across the border, flashing passports at disinterested immigration officials. 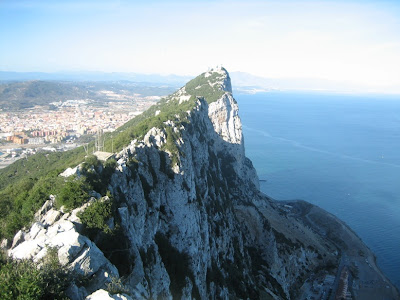 5th Bus: Gibraltar local bus, complete with pommy school kids, which took us to the foot of the cable car. We took the gondola to the top of the Rock, from which we were treated to spectacular views of the Atlantic, Mediterranean, Morocco, Spanish towns including Algecira and Costa del Sol. We also bonded with the apes living on the Rock (I kid you not). They are semi-tame, and will apparently rip food out of your hands, so you're not allowed to have food anywhere near them. We then descended and walked along the main street of Gibraltar and ate fish and chips. Very cool to have been there.

6th Bus: Back to Algecira from La Linea. Downed a glass of red wine for one euro, while waiting for the final bus.

7th Bus: From Algecira back to Tarifa. Arrived back just after 9:30pm.

Tomorrow is intended to be a relaxing day in the beach town.
Posted by Ellen at 11:01 pm