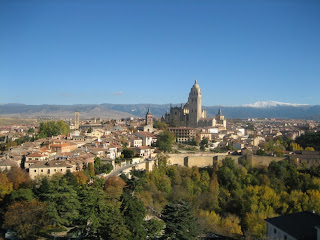 It has begun. Spain. I have wanted to come here for so many years and although I was a bit underwhelmed by San Sebastian, Segovia is stupendous.

A medieval walled city on the top of a hill, Segovia is a city of churches and monasteries, with one almighty giant cathedral perched on the crest of the hill. The cathedral dominates the skyline no matter which way you look at it, a giant bauble that is far too big to be taken seriously. 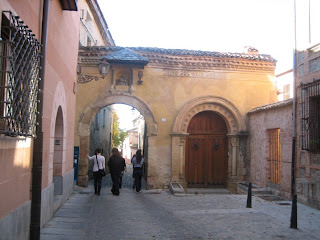 Somewhat surprisingly, I didn't enter any of these houses of worship (it cost 3 euro to enter the cathedral) because there was too much else to do! Even just walking through the cobbled streets, dodging cars (one wonders who would want to drive down some of these streets), gazing upon one old building after another, sipping sangria in the plaza major (main square), skipping along the medieval walls (largely intact), was enough to keep us busy for hours. 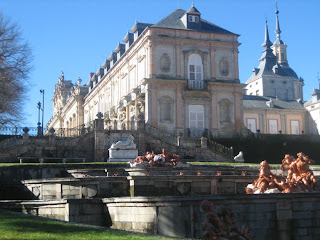 We also visited two palaces today. The first was in the nearby town of La Granja, and we first had to work out how to catch the bus there (and back again). The 'Royal Seat of La Granja de San Ildefonso' was used as a summer residence of the Spanish monarchs for a time in the 18th C and was apparently modelled on Versailles in Paris, although is not nearly so grand. It has acres and acres of gardens, criss-crossed with paths and 28 extravagant fountains. For our visit, the fountains, which feature ornate sculptures of Greek/Roman gods made from bronze-painted lead, were dry, and we had to imagine the cascades of water. The gardens too were showing signs of neglect – it put me in mind of what Sleeping Beauty's garden must've looked like 100 years later... Well, maybe not quite so overgrown. 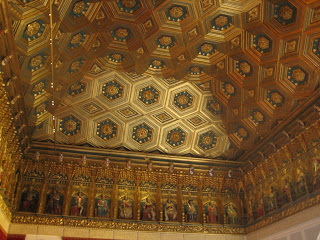 The second palace/castle was the Alcazar, the medieval fort in Segovia itself. It dates from the 12th C and was the royal residence of the monarchs of the Castile. Over time it has evolved, and the addition of slate-roofed tower spires makes it look a bit 'fairytale' – although in my view this doesn't quite fit with the rest of the castle, which is constructed of a golden stone and has many elements in the 'mudajar' style. Inside were displays of armour, art, arms, and spectacular carved ceilings and friezes. We also climbed to the top of the tower (156 steps), from which we gained a magnificent view of the town (and the cathedral).

I have spent the whole 1.5 days in Segovia with a smile on my face and a skip in my step. Bring on the rest of Spain!
Posted by Ellen at 10:00 pm