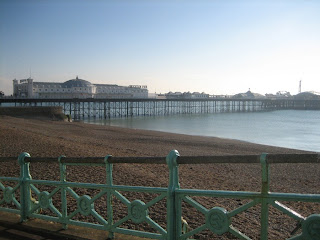 Having spent most of my childhood and formative years in Brighton, Melbourne - Australia, it seemed fitting I should visit its namesake in England. I had heard and read much of Brighton. It's where Lydia Bennett elopes from in Pride and Prejudice, and the Royal Pavilion is referred to many times in Georgette Heyer's regency romances. And of course there are the famous Brighton Pier and pebbled beaches. Visiting Brighton was therefore high on my priority list, and we went there from Portsmouth last week (before the snow arrived).

Instead of staying in the heart of Brighton, we found a quaint 1930s inn (The White Horse hotel) in the nearby village of Rottingdean. By this time I felt as though I were living in one of Ms Heyer's or Austen's novels. The inn was perched on the edge of the sea, and featured a bar and restaurant below – perfect. Our rooms were modern and comfortable, I hasten to add, as the hotel is run by a group that specialises in old english inns. I rather think I could tour England staying in them. 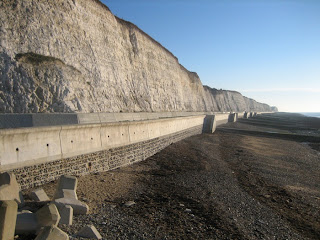 On a beautiful sunny morning, we took the UnderCliff walk from Rottingdean into Brighton. This took us rambling below about a mile of white chalk cliffs, through the Brighton Marina, and into the town. Once there, we wandered through some of the streets and famous Lanes, and sauntered down through the penny arcades to the amusement park at the end of Brighton Pier.

Then we went to the Royal Pavilion, built as a pleasure palace by the Prince of Wales (later George IV) in the late 18th C. The Pavilion is almost indescribable. Its exterior is somewhat interesting, while on the inside its entertaining rooms are incredibly elaborate – they have to be seen to be believed. I am left with impressions of much gold, hundreds of Asian or Chinoise-style dragons, sumptuous fabrics . . . (Unfortunately we weren't allowed to take photos.) The visit included an audio tour that provided all the history of the palace, which was sold by Queen Victoria to the people of Brighton in around 1845. As a royal residence, the Pavilion had a fairly short life, but it still oozes history and is quite stunning (in both senses of the word) to behold. 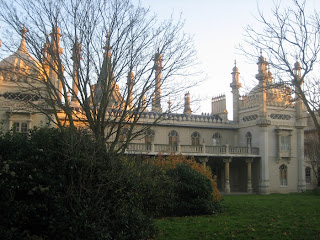