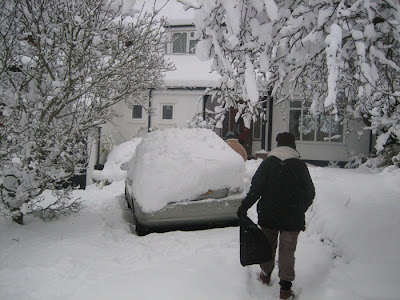 Not sure whether it has made international news, but the UK is in the grip of most unseasonable weather! We are currently snowed in, more or less housebound (although the local high street is a 10 min walk away), and spending a lot of time gazing out the window to marvel at the snowscape of laden trees and half-buried cars.

It has been freakishly cold ever since we arrived in England a week or so ago, and we first woke to a blanket of snow in Evesham on Saturday. In Portsmouth on Sunday, we were most amused by a storm of fake snow at the 'Victorian Christmas Festival' at the Historical Dockyards . . . only to be thrilled by actual snow falling outside, as we watched from within a cosy cafe sipping hot chocolate.

Then we awoke on Tuesday to behold a snow-dusted pebble beach at Rottingdean, just outside Brighton, and our car was also covered by what we then considered to be a fair blanket of the white stuff. The day looked grey and the forecast predicted more snow, so we abandoned our plans to drive to Hastings for the morning, and instead made a beeline for our friends' house in Orpington, Greater London. It was only around 40 miles from Brighton so we thought we might make it for morning tea . . .

All went well until we exited the motorway for Orpington. With only about 3 miles to go, we slowed to a crawl, stuck in a bank of cars that edged forward at a rate slower than walking pace. Initially we founded the whole thing thrilling, enduring snow in the face to take photos. I had certainly never seen such massive, snow-flake-shaped snowflakes! They were perfect. But by the time it had taken 2 hours to arrive in the high street, where traffic was completely gridlocked owing to two stuck buses, the novelty had started to wear off and we all needed a bathroom.

We parked the car right there in the high street (putting a pound into the pay and display machine, although it my view this was unnecessary), and dashed across the road to McD's, where there were not only toilets but free WiFi. We googled the address of our destination, established it was only a 10 min walk, then arrived on foot on the doorstep of our rather surprised hosts, who had by this time concluded we were probably doomed to spend the night in the car somewhere in the middle of the motorway. (I should say at this point that persons nameless had not remembered to bring either phone number or map of said hosts' residence. . .)

By this time it was after 1pm, so we ate lunch before attempting to retrieve the car (and our luggage). Lucky for me, this task fell to others, who set about planning the route with the lowest gradient – by this time many of the roads were impassable, particularly those with significant slopes. The car did not arrive for another 3 hours. It is now parked in a bay at the bottom of the hill, gradually becoming buried by the snow. We had to carry our backpacks up the hill to the house, and were immensely thankful we weren't reliant on wheelie cases.

After snowing all day yesterday, it has continued to snow overnight and all day today. I confess that now I am snug and happy inside, it's all rather exciting again. We donned our gear and trekked down to the high street this morning to get some bits and pieces, and I loved stomping through more than a foot of fresh powder. So light and soft! Like spun sugar.

Tomorrow the forecast is for more of the same. Everywhere around London the traffic is chaos, and the public transport system is in a shambles. Many of the trains are not running. Not sure about buses. Our next challenge is to return the hire car, which was actually due today, and then get back here somehow . . .

For the short term I don't mind being housebound, because after nearly 6 weeks travelling I'm due for some relaxation time. I'm quite happy for now to read and write and watch DVDs (although I'm hoping my hosts' internet connection will be up again soon – I'm writing this offline). Eventually the snow will disappear, or at least stop falling, and I will resume my explorations.
Posted by Ellen at 9:51 pm