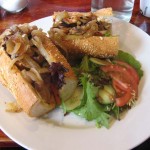 One of the local Elsternwick cafes I frequent most often is Edna's Place, a homey-yet-funky cafe with an expansive Israeli-inspired menu spanning salads, all-day eggs, flat breads, toasted pides and the wonderful 'chicken baguette' (pictured).

I discovered Edna's soon after moving into the area and first trialled the popular chicken baguette (heavily marinated chicken and caramelised onion with tomato, lettuce and mayo in a white baguette) when prompted by a big red sign out the front of the place. The chicken baguette is juicy, flavoursome mouthfuls of awesome. Now my addiction is such that most times I decline a menu on the grounds that to simply order my chicken baguette with my large skinny flat white is more time-efficient.

I am not alone in this addiction. It is shared by my cousin, who lives just down the road, and we have been known to send each other texts on the weekends with the simple message: "baguette?". I am somewhat ashamed to admit, however, that I have frequently gone for a solo baguette if company is unavailable.

As a result of this obsession, I've not actually tried much else on the menu, although it all looks fabulous. The coffee is Map and is decent enough, and there is usually a choice of cookies and homemade cakes. Plus they don't mind me sitting there for a while with computer or book, and it's a comfortable environment in which to do so.

Recently my association with Edna's Place has shifted up a gear. Now it is not merely the place where I go for a baguette fix on the weekends; it is also the place where I meet my sister and two nephews (and occasionally my mother) on an almost weekly basis for coffee/early lunch. This is one of the perks of not working, and I daresay will have to end soon, but for the moment it's fantastic to meet them there on Wednesday mornings for cuddles and smeared Vegemite sandwiches and spilt milk and even the occasional chicken baguette!

[This is the first in a series of intended posts on local cafes in Elsternwick.]
Posted by Ellen at 1:41 pm