Astor double: Water for Elephants and Never Let Me Go

The Astor Theatre in St Kilda East is a lovely old art-deco cinema house, famous for its choctop icecreams, resident lap cat, massive silver screen, uncomfortable seats and double-feature screenings. (In fact, it also offers triple-feature screenings on occasion . . . for instance LOTR movies one, two and three all in a row. An amazing experience I am somewhat tempted to repeat on Sunday 31 July . . .)

The two movies I saw last Friday were Water for Elephants and Never Let Me Go. The latter I had wanted to see on first release earlier this year but missed it; the former was recommended by a friend who had read the book. 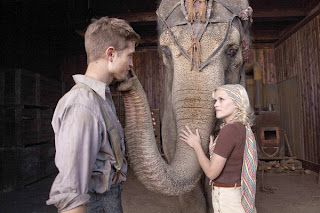 Water for Elephants (starring Reese Witherspoon and Robert Pattinson) is based on the novel by Sarah Gruen. It's essentially a love story, set amid the backdrop of a US depression-era travelling circus. Jacob, a final year veterinarian student of Polish descent, is left destitute and finds himself joining the circus (kinda a cliche when you think about it), where his vet skills are appreciated . . . most of the time. The circus owner, a charming/vicious psychopath who has his thugs throw men off trains and mistreats the animals, buys an elephant to be his new star attraction and demands Jacob get it to perform. So Jacob bonds with the elephant -- and the psychopath's beautiful wife.

The film portrays an era of history very convincingly -- the recreation of the circus is brilliant. And Rosie the elephant almost steals the show, particularly after the film's Great Coincidence is revealed (which is that Rosie happens to understand only Polish commands . . . and Jacob is Polish) and she starts performing all kinds of tricks. But, while it was an enjoyable enough film to watch, it doesn't offer a whole lot new or thought-provoking. 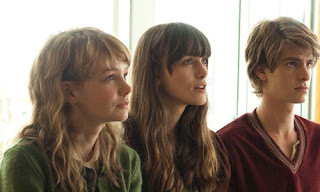 Never Let Me Go, on the other hand, is incredibly thought-provoking. Based on the novel by Kazuo Ishiguro and starring Carey Mulligan, Andrew Garfield and Keira Knightley, the film is a dystopian science fiction love story set between 1978 and 1995 in which human clones are bred as part of a National Donor Program.

Kathy, Tommy and Ruth have all been brought up at the 'special' Hailsham school for children in the program, and later as young adults find themselves out in the world (to some degree) when they live at 'The Cottages'. But their life has one purpose and that is to donate their organs one at a time until they 'complete' (die). Seeking to find purpose until her time to donate arrives, Kathy volunteers to be a 'carer', a clone who cares for other clones after they have donated.Years go past and she loses track of Ruth and Tommy until she comes across Ruth, weak and ill, having commenced her donation program. They track down Tommy and the friends reunite for a short time. A significant thread to the film is the love triangle between the three, with Tommy torn between his true love Kathy and Ruth, who came between them as his lover a long time ago.

There are many other heart-rending aspects to this story. Tommy, for instance, spends years drawing pictures, having formed the theory that the artwork they produced as children was used to look into their souls in order to prove whether they truly loved and could be awarded a deferral on their donation duties. This hope is quashed when they learn the art was to see whether they in fact had souls at all.

It's a beautiful and disturbing story, but I did have a problem with some of the logic in the way the donations were dealt with. For example, why take the organs one at a time and then stop when the clone 'completes'? Surely it would be more efficient simply to harvest the lot all at once -- it's not as though the officials seem to care too much for these poor young people. Or, at the very least, take them all when they finally complete. In the film, Ruth flatlines as they remove her liver, but what about all the other perfectly good organs still lying there on the operating table?

It's also extremely hard to reconcile the idea of an alternate world where such a thing is condoned. (We are given very little insight into the attitudes of non-clones in this film.) And the utter acceptance of their fate on the part of the clones is hard to take. Why don't they try to escape? Aside from having to pass a wrist implant over a scanner when they leave/arrive home, no-one seems to keep any tabs on them.

But if you accept the dystopia thus presented, it's an amazing story and a beautiful film. The performances by the three leads are mesmerising -- particularly Keira Knightley, who is almost unrecognisable in her mannerisms as Ruth. Carey Mulligan's role is much more understated, but her anguish and hope are just as beautifully portrayed.