Fire - a novel by Kristin Cashore 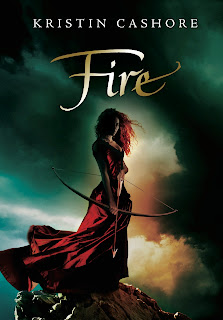 Sometimes my pile of stuff to read looks overwhelming and I despair of ever getting through it. So the other day I picked up one of the thinner tomes and determined to inhale it. This turned out to be Fire, a 380p young adult fantasy by Kristin Cashore, with a gorgeous picture of the bow-n-arrow wielding heroine on the front.

The story is set in a memorable land dominated by 'monsters', which turn out to be brightly coloured and ever-so-slightly skewed versions of real creatures -- from bugs, to mice and cats, to horses and even raptors, which provide one of the greatest natural menaces of this world. They're as a rule not scary to humans (except for the raptors and other more naturally vicious beasts), but supposedly can be mentally seductive to the weak-minded. And they rather like eating each other.

17-year old Fire is the last human 'monster'. Her incredible (and seemingly unnatural) beauty inspires great desire in weak-minded men (and some women), and she can also actively manipulate the minds of other humans. Her now-deceased father used the same attributes to control and hurt other people, seek power for himself, and generally believe himself to be superior. But, somewhat remarkably, Fire is a gentle and moral soul brought up by a regional lord; she understands and despises her power and beauty, choosing to keep her flaming red hair bound most of the time (especially when out of doors so the other monsters don't recognise her and try to eat her) and living quietly away from most other people.

While I enjoyed reading this book, it's not a classically structured story. Much of the big plot revolves around Fire being cajoled out of 'hiding' to help the royal family (a bunch of handsome young siblings) as they try to fend off civil war coming at them from two different directions. There's also a sideplot involving a renegade Graceling boy from the neighbouring kingdom, who uses his silvertongue powers to cause havoc in his quest for power. [This sideplot is a clear effort to tie in Cashore's first novel in this so-called series, Graceling. (Somewhere I read Fire is a prequel.) I found the resolution of this plotline a little distracting and not terribly cohesive. I don't think it was integrated enough with the other parts of the storyline.]

But Fire's story is a lot more personal than these. Most of her decisions are driven by the need for redemption: primarily for her notorious father's terrible actions. She also has to deal with many different facets of love -- there is of course a primary love interest in a thread that plays out gently and beautifully, but there are many other aspects of love explored in this book with its different well-drawn characters. And ultimately her story is about coming to terms with her abilities and the fact that she can use them for the power of good, and coming to love and trust herself.

I suppose one of my biggest 'reading as a writer' questions is Fire's role as protagonist -- although she transforms from a personal point of view, in terms of the overall story she remains a fairly passive character. Sure, she plays a role in uncovering a plot and she manages to extricate herself from a tight spot, but she doesn't really impact major events moving forward. And she doesn't seem to have much of an external story goal. Having said that, I was certainly engaged by the story and characters, and events pulled me through, so something must have been working.

I also thought the worldbuilding could have been taken further. Cashore spends a lot of time on a few cool aspects of this world, and leaves out the mundane stuff like how the economy works. It's an interesting example of how a world can feel real with just a few stand-out elements. But I think she could have done more with these few elements -- there seem to be a few holes . . . Probably my biggest question is why these 'monsters' are limited to this land (The Dells) and haven't managed to migrate over the mountains. And how did they come to be, anyway?