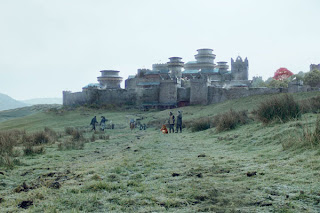 I have just finished watching the first season of Game of Thrones (a new fantasy drama series based on George RR Martin's A Song of Ice and Fire, of which the first novel is A Game of Thrones).

The things I liked most about it: 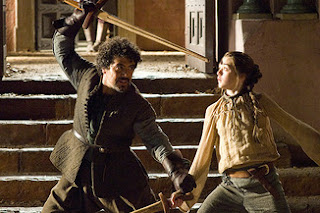 But I expected to be more enthralled by the story, given everything I've heard about the books. Turns out it's a relatively simple tale about power and betrayal. There are lots of men and women of different houses scheming and chest-thumping and kidnapping and killing each other. There's not much love. And an awful lot of lust. The house politics seem familiar and the world is 'post-magical' medieval -- except for various references to dragons and the mysterious happenings in the north 'beyond the wall', which I sense will become more prominent as the series progresses.

It's all very graphically depicted on the screen -- including both the violence and the sex. There are probably too many  gratuitous sex scenes and nudity, and some are pretty rough. I suspect this won't be for everybody, nor the violence. I had to cover my eyes a couple of times each episode as throats were cut, or heads chopped off, or -- in one memorable scene -- a pot of molten gold tipped on someone's head. Ugh. 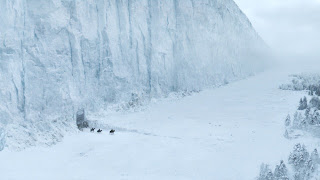 On the whole, though, I think the TV series has been brilliantly made. The acting is great and they have done a good job at dividing a novel into 10 episodes that work. When it comes down to it, it's probably not my favoured style of fantasy, but hey at least they're doing it. And as mentioned the realisation of the world is fabulous. It will be interesting to see how season two evolves.
Posted by Ellen at 11:06 pm