Harry the very last (and tonnes of rubble) 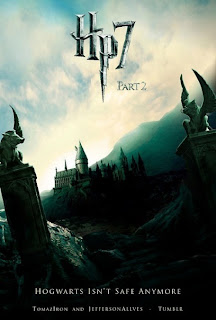 I saw the final Harry Potter movie tonight -- it's pretty good! HP and the Deathly Hallows part 2 is action-packed with explosions, death and a cackling Voldemort. And rubble. Tonnes and tonnes of it.

There are plenty of quieter moments too, grief and revelation sandwiched between the mayhem. My first impression is that the pacing was pretty good, and the plot very close to the book.

When it was first announced that the final book would be made into two movies, I wasn't convinced it was necessary. However, I now agree with the decision, because it meant they didn't need to leave anything much out. All the other movies had great slabs of the book slashed from them, but to do that to this final movement, the culmination of a seven-book arc, would have been a crime. There are parts that are skimmed over, sure; but at least they are for the most part there. And as a dramatic climax to the series -- for that is really the role of this film -- it works really well.

If I had a complaint about this last movie, though, it's that Ron and Hermione seemed a little more peripheral than normal. In the previous movie, Hermione in particular played such a crucial role, and the tone of this last one was so completely different. I think Hermione and Ron deserved a little more prominence and stature in the end. In fact, most of the characters probably got a little short-changed. Casualties of an action film. (Whereas part 1 was all about character...)

I was also expecting that more about Dumbledore's past would be revealed. A glaring omission from the first of the Deathly Hallows movies was Harry discovering the true life of Dumbledore; the movies have sketched over this extremely briefly.

On the whole, however, I think the movie was great. I think my favourite moment was when Professor McGonnegal takes back the school and leads the resistance. And there were plenty of moments that brought a lump to my throat, especially the tragic story of Severus Snape. Not to mention dozens of cameos from various actors who have appeared in the other movies (Emma Thompson springs to mind).

But don't bother going to see it if you've not seen the previous movies. And if you haven't already, go read the books -- if for no other reason than to discover the brilliant character of Nymphadora Tonks, who was reduced in this movie to nothing more than a corpse.