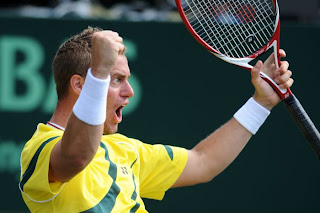 Why do we get so invested in sport? When watching it, I mean. Were I blissfully unaware of the Davis Cup World Group play-off currently underway, I would be quite happy to hear the result and not get in too much of a lather about it; but because it's on the TV and I am watching it, it seems terribly important that Lleyton Hewitt wins the 5th and deciding rubber against Switzerland to get Australia back into the World Group (and hence able to play for the actual Davis Cup in 2012).

YESSSSS! (Lleyton breaks back to go two-all in the fourth set...)

My heart-beat is up and I'm holding my breath as Lleyton ("Australia's best Davis Cup player ever," say the commentators) slogs it out against Stanislas Wawrinka. The crowd is right into it. I wince as the ball hits the net cord.

Put any sport in front of me and I can't help picking a side or competitor to go for. But when I like and follow the sport, it's so much more intense. If it's live netball, and Australia or the Vixens are playing, I can't look away. During the recent World Netball Championship final, when Australia beat NZ in double extra time yet again, my entire body was scrunched up on the couch, frozen solid, fingernails in mouth. Winning that match meant everything at the time. Life and death important.

I mean, really. It's a bit ridiculous. I can kind of understand it when it's a case of national pride -- as with Davis Cup Tennis or Ashes Cricket or the World Netball Championships. But why do I go so nutty for the Vixens during the netball season -- and why do Melbournians go absolutely mental for their AFL team (whether or not they are watching it)?

And now Lleyton's match goes into the fifth set. Sigh.
Posted by Ellen at 5:33 pm