This morning: Stumbled out of bed to feed the devilcat at approx 5:30am. Stumbled back into bed.

Half an hour later: Dragged myself out of bed and . . . holy firetruck! DEAD RAT on the floor of my bedroom, right where I should have stepped on it. Intestines streaked across the floor.

Much gagging and screeching at devilcat. Nearly miss train owing to cleanup and disinfectant operations.

Just now: Cleaned up rat's blood from floor of my bedroom -- RIGHT NEXT TO MY BED -- where I didn't notice it this morning.

In which Wendy Rule sings


Saturday night found me at the Caravan Music Club (Oakleigh RSL) to see Melbourne singer/songwriter, Wendy Rule. Whenever I go to a music gig, I always wonder why I don’t do it more often. Awesome music aside, in this particular case it might have had something to do with the fact that the intimate and cosy venue was local with easy street parking, or that the gig started early and was over by 11pm, or maybe that our seats came with a gingham-clothed table complete with candle and a glass of red. OK, we had to buy the wine (at RSL subsidised prices); but how civilised to sit back with glass in hand and listen?

And how we did listen.

I had not heard Wendy Rule before, and I enjoyed her music a lot. It’s an acoustic blend of folk, world and jazz (ish), delivered by a remarkable voice that is perfectly made for chanting (as she does) and which has the capacity to go amazingly deep. As I listened to Wendy sing, I imagined her testing out that voice as a child, figuring out what it could do, and composing music to suit. It’s a mighty instrument. She was accompanied by the dulcet tones of a cello, guitar and drums.

Wendy’s songs were heavily themed towards paganism, spiritual belief systems and classical mythology. She opened and closed with a chant designed to first close and lastly reopen the circle, singing tributes to the north, west, south and east. (I took the opportunity to pull out my new iPhone with compass app and check she had the directions right.) Then her various songs paid tribute to the likes of Venus, Artemis, Hecate, aspects of nature, the moon . . . My kinda stuff, really.

Wendy Rule would not be out of place at the Port Fairy Folk Festival (I bet she’s played there before) and it made me realise how much I’m going to miss going to that every year. I intend to keep an eye out for upcoming Caravan Music Club gigs and attend a little more often, particularly the folk-oriented performances. For a slick and far more accomplished review of Wendy’s gig, visit Jason’s review here. He’s a long time fan and knows stuff like the names of songs and albums.

Email ThisBlogThis!Share to TwitterShare to FacebookShare to Pinterest
Labels: music

Status update: How my life is like a children's dress-up box

My life is presently like a box into which I am trying to jam an entire lifetime of belongings. Imagine bulging sides, bursting seams, stuff hanging over the edges, other stuff abandoned and strewn haphazardly in a three metre radius.

It looks like a children's dress-up box after the hordes have abandoned it.

While on work-hiatus I fear my life expanded to fill the time available (Parkinson's Law?). Now I seem to have no time to do anything. Right now it's the end of the weekend and my to-do wish list is woefully incomplete.

The list of unread posts in my Google Reader is frightening . . . I haven't looked at (or even thought about) my novel WIP in weeks . . . I still need to research the best superannuation companies. And cars.

On the up side, my house is half clean, the washing is done, and I have enjoyed a final weekend of eating out before I launch into a LitenEasy campaign tomorrow.

Work. I knew I didn't have time for it.

Having said that, the new job is going well so far. The people seem nice and the company culture seems good. After two days of head spinning, I was productive for the final three days of my first week. But the commute on public transport is not good, with two trains and a bus the most reliable route. It's a lot of messing about, which hasn't been fun in the rain. And it's a lot of time that could be far more effectively utilised. I need to figure out how to fit in writing (daily) . . . and exercise. Therefore a car will be required . . . once I get the time to research which one.

Anyway, this is just a short update. At least I now have a smart-phone with which to stay in touch during the working day. (My Internet use at work is both restricted and monitored!) After a year of enjoying perpetual social media, I really don't think I can bear being cut-off from it all day. So a smart-phone was an essential aquisition for this weekend.
Posted by Ellen at 6:34 pm 2 comments: 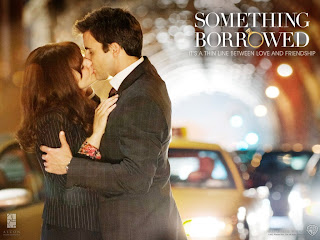 OK, I'm going to share something a little embarrassing. But it's also funny. And weird.

It all started on the flight to San Diego two weeks ago, when I watched the RomCom movie Something Borrowed. It's a perfect movie for a plane -- light, funny, happy ending . . . So at the end of the flight, after watching X-Men First Class and catching some zzzz's (on my three seats!), I watched Something Borrowed again.

I don't normally repeat-watch on a plane, but something about this movie really grabbed me. On the surface it's nothing special. Six years ago, Rachel (Ginnifer Goodwin) introduced her best friend Darcy (Kate Hudson) to Dex (Colin Egglesfield), Rachel's fellow law student, who she has a crush on but thinks he'd never be interested in her. Now Darcy and Dex are engaged, with Rachel the maid of honour, but an offhand remark from Rachel in which she admits having had a crush on Dex during law school, leads to Dex admitting similar feelings and the two end up having a guilty affair . . .

Not everyone agrees with me, but I like the chemistry between Rachel and Dex, and I love the setup, because it feels like something that could really happen. The moral dilemma is brilliant. Sleeping with your best friend's fiance is BAD BAD BAD (as is sleeping with your fiance's best friend), but somehow I'm really moved by the scenario of Rachel and Dex actually liking each other first, realising feelings they've buried but which have not gone away. Should they pretend nothing has happened? Should Dex marry Darcy, who he realises is the wrong woman? Should he break up with her without pursuing Rachel?

The story is made slightly more palatable by depicting Darcy as an obnoxious character, who cheats on Dex, but Rachel, essentially a good person, is still riven with guilt . . . and yet strives to win Dex for herself. There is no neat answer. Someone is always going to be hurt.

Anyway, I liked it. So on the return flight . . . after watching Rise of the Planet of the Apes and Larry Crowne . . . I watched Something Borrowed again.

And then, when I was passing JB HiFi and browsed the DVD section . . . yes, all right so I'm a tad obsessed. And I watched it again last Saturday night!

So now I've watched the movie four times in two weeks. And then (this is so embarrassing) I downloaded the original novel by Emily Giffin onto my kindle and I'm er . . . reading it. In my defence, it makes a good public transport read for my tedious commute to Brooklyn (more on that later).

I really cannot explain what it is, but there's something about this movie that won't let me go! Don't think too badly of me. And if you've seen it (or read it), let me know what you think!

This year's work-free sabatical culminated last week with a short trip to San Diego to attend the World Fantasy Convention. It was an awesome trip. I'm blogging about the convention itself elsewhere, but I did have a couple of days at the end for a spot of sightseeing...

Last Monday I trekked off with some friends to the San Diego Zoo, reputedly one of the greatest in the world. It certainly is large and impressive, and we didn't manage to see everything. But I got the general idea!

Highlights for me were the Giant Pandas (putting on a show with their bamboo), the eagles (so massive, although in disturbingly small enclosures), the hummingbird aviary (tiny birds like giant insects)...

I think that what the animals are doing determines how interesting they are, so I wasn't too inspired by the sleeping polar bear, or the sleeping hippo, or the lazy gorillas... But the otter that swam down the 'stream' was pretty cool!

The next day I was own my own and took the trolley two stops from the hotel/resort to San Diego Old Town, which is a sprawling tourist destination comprising craft shops and reconstructed buildings from the early days of the town. It reminded me of a low-key and free version of Sovereign Hill in Ballarat.

Festivities at Old Town were heightened for the two-day Dia de los Muertos (Day of the Dead), a Mexican festival celebrated in San Diego, owing I suppose to its proximity. This meant numerous alters, beautifully decorated, to commemorate specific individuals (e.g. Frieda Kahlo and Marilyn Monroe). It also meant lots of food specials (mostly Mexican! I ate a lot of Mexican while in San Diego), and artisan demonstrations. I had a lovely chat with the blacksmith (who seemed very keen to recruit interested parties to the craft), and bought HEAPS of stuff from assorted shops to cart home!
Posted by Ellen at 7:20 pm 1 comment: