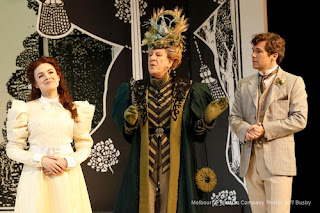 Last week I saw Oscar Wilde's The Importance of Being Earnest, staged by the Melbourne Theatre Company. This really is the most amazing play. It's so well plotted and scripted that even a children's production would have the audience on their feet. As one reviewer put it: The brilliance of the play is in the dialogue. I emphatically agree.

I enjoyed the MTC's production, particularly the staging, which utilised an enormous pop-up book that was opened by one of two marvellously funny-but-very-different butlers (played by Bob Hornery) to reveal each of three backdrops. Geoffrey Rush played Lady Bracknell in a more understated fashion than I expected, which in hindsight was probably a good thing!

I was really looking forward to seeing the play, which caps off my inaugural MTC season with friends, and it proved to be the perfect play to finish on. Light-hearted, hilarious, brilliant.
Posted by Ellen at 11:30 pm

Email ThisBlogThis!Share to TwitterShare to FacebookShare to Pinterest
Labels: theatre