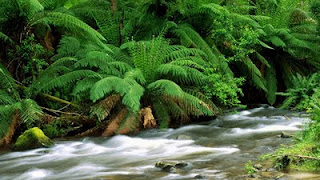 A week ago I sat in the Garden of Remembrance, sad and heart-heavy, and sifted through my memories of my uncle.

They are many, and in a strange way hark back to my earliest memory, more an impression really, of his wedding to my aunt when I was but 10 months old.

Growing up, our two families were close. We shared family holidays, birthday celebrations, schools. And always my cheerful, smiling, big-hearted uncle was there.

One day, when I was still a kid, we were all bushwalking, somewhere in the Otways I think, but I can't be sure, and he bent down to the path and pointed out the tiny delicate plant growing there, its sticky leaves trapping insects. A Drosera, he called it, common name Sundew. The first carnivorous plant I ever saw.

We spent many holidays down in Lorne, where my cousins lived in the house behind my uncle's newsagency. He had a red mini moke, which he used to deliver the papers, up and down the hills behind the town. We used to sit in the back and squeal with delight when he hooned up and down 'the big dipper'.

Later on, he had a hardware store in Melbourne, and every so often we kids would all band together to deliver pamphlets for the latest sale. And when I was older, in high school, I spent a few Christmas Eves manning the cash register on this crazy busy retail day.

Over the years, my uncle made such a habit of arriving at the back door just when we were dishing out the most delicious dessert, that we almost started saving him a serve -- just in case.

So many memories. His love of nature and growing things. His irrepressible energy and willingness to pitch in and lend a hand. Red wine. Classical music, played loudly. I particularly associate Holtz's The Planets with him.

Two weeks ago on 28 January he passed away from Motor Neurone Disease after a very tough year for him and his amazing family, who cared for him so well that he was able to slip away in peace, at home, surrounded by his family. That night several of us went around to join his family in eating home-made pizzas in his honour.

Last Friday, at St George's Church in Malvern, we said our final farewells... and I slipped into the Garden of Remembrance, where my grandparents' ashes are interred, and wrote down some of the memories I have shared above. Tears streamed down my face then, as they do now.

But then we all went back to the family home and celebrated his life with family, extended family, friends of his, friends of his children. And even though I expected him to walk through the door at any second, with his big grin and unassuming demeanour, we gradually started to come to terms with the fact that he is gone.

He will be very much missed.